How does your garlic grow? 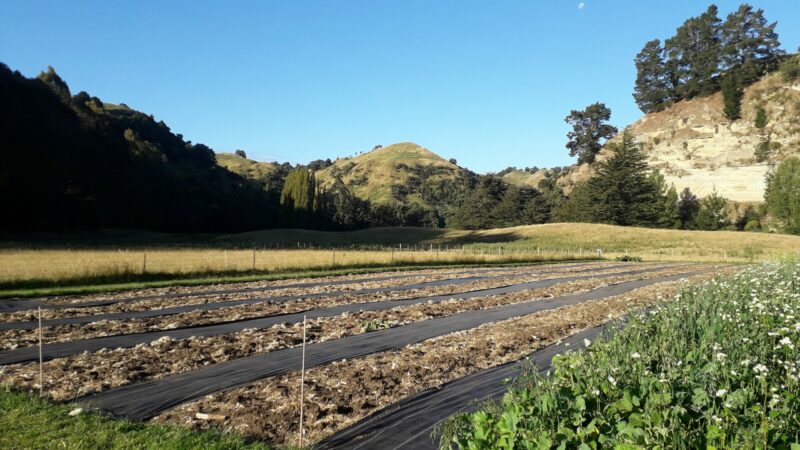 For the garlic growers of Moa Valley Farm, soil health and farming organically are fundamental to their new venture. Words and Photos Diana Noonan

New life has sprung up in what was once a tired paddock on the banks of the Moawhango River, 20 minutes from Taihape. It’s the work of Rita Batley and Vanessa Witt who, together, are rejuvenating around a hectare of soil at Moa Valley Farm to produce nutrient dense crops. And their first fruits are harvests of 20,000 bulbs of garlic a year.

Vanessa, who has a permaculture background, describes their land as being “free-draining silty loam” with an initial deficiency in phosphorus. However, as she explains, it’s the soil’s biology that interests her most.

“My understanding of the organic culture is that you don’t put too much emphasis on chemical analysis. Instead, you work towards supporting the soil life you have. If you do this, then the microorganisms you encourage will seek out the chemicals and the nutrients that the plants need, and take it to them.”

Although tilling at Moa Valley is undertaken with hand tools or small scale machinery, the rock-hard paddock was initially broken up with tractor work. Whatever was on hand was then used to add organic matter to the ground.

“We used whatever we could find,” says Vanessa. “That was sheep manure from Rita’s farm, some old bales of quinoa straw and some more straw from a local farmer, which we used for mulch. As time’s gone on, we’ve developed our use of cover crops so, now, we’re actually growing our organic matter on site.”

The days of tractor power are long gone, and in its place are recently acquired, small scale, motorised tools.

“We’ve bought a flail mower,” says Vanessa, “because it’s tough enough to deal with the tough, stalky cover crops we grow. We also have a power harrow that mixes up the top few centimetres of soil. With this low-key machinery, we get a nice layer of mulch through which we can plant our garlic cloves.”

Planting is carefully planned because garlic doesn’t enjoy competition, even from its own kind. In fact, spacing is everything.

“If you plant the cloves too close together,” says Vanessa, “the plants won’t form big bulbs. We space our cloves at least 15cm apart, with approximately 20cm between rows. We plant the cloves twice as deep as themselves. Any deeper, and they have to work too hard to reach the light. If ever you read that cloves should be planted deeper, then that information is probably coming from a northern hemisphere grower who is gardening in a harsher climate than what we have in New Zealand.”

Vanessa is at pains to point out that garlic isn’t happy with wet feet. While this isn’t a problem in Moa Valley, growers in wetter areas – or those who work in soil that is poor-draining – will need to resort to built-up beds. However, it’s the choice of garlic variety that holds the greatest opportunity for success. And Vanessa and Rita have it sussed.

“Initially,” says Vanessa, “we just bought a large quantity of standard commercial garlic which, for
us, was ‘Printanor’. However, my permaculture brain told me we needed to diversify. So, over
the past two years, we’ve bought a kilo or two, here and there, of any other variety we can find,
simply to experiment with. One thing I can say for sure is this: the shortest day/longest day thing
doesn’t actually apply. Planting time depends on the variety of garlic that you’re growing.”

For Moa Valley, that translates to planting early varieties, such as those in the Turban
group, in April.

“Turbans,” says Vanessa, “are garlics that have a hard neck or ‘scape’ in their centre. Around the
scape cluster a single ring of large cloves. Turbans tend not to keep as well as other varieties.”
Artichoke varieties of garlic are planted in later April and early May. In New Zealand, a common heirloom variety of artichoke garlic is ‘Takahue’.

Late varieties are planted in June (in colder regions, such as Taihape, they can even go in as late as July). Moa Valley’s late garlics are ‘Printanor’ and ‘Kakanui’, from the Silverski group. They are the garlics most commonly found in New Zealand supermarkets.

Moa Valley’s garlic harvest begins in the first week of December, with the early varieties. Towards the end of December, the mid-season varieties come out of the ground. The first two weeks in January see the late season varieties being harvested. So, although there can be a wide gap between the planting of varieties,
harvesting takes place over a shorter period. “The way we tell the garlic is ready to harvest,” says Vanessa, “is by the number of green leaves left on the plant. The general rule of thumb, across all the varieties, is that if roughly half the leaves are still green, and half the leaves have died back or are starting to die back, then the plants are mature.”

Vanessa says that some commercial growers cut the leaves off their garlic as soon as it’s harvested, with the bulbs then going straight into crates and storage. Moa Valley, however, keeps the leaves on their harvested plants. And while many growers leave their plants lying on the soil for an initial drying off, Vanessa and Rita prefer to bring the garlic under cover as soon as possible. Vanessa explains: “We try to get the harvest straight into our drying shed because garlic can be damaged by hot sun. If the bulbs get too much heat, they will turn ‘waxy’.”

What every garlic grower up and down the country wants to know, of course, is how to deal with rust, and on that subject, Vanessa has some valuable advice.

“A lot of people tell us they’ve given up growing garlic because of rust, which is such a pity. My understanding is that rust operates in moist conditions within a temperature range of 14°C
and 24°C, with 15°C providing optimal conditions. We haven’t had a single year where we’ve had no
rust. However, because of our climate, it doesn’t appear until December, just as the garlic is maturing. This means it doesn’t impact the crop too much.”

What this means for home gardeners is that, although it’s unlikely rust can be avoided, it can be managed by carefully choosing planting times, and selecting varieties to suit. Vanessa also recommends a regular foliar spray of seaweed throughout the growing season. She calls this ‘an immunity boost’ as it makes sure the garlic has the micronutrients it needs to remain as healthy as possible. What she doesn’t recommend, however, is the use of fungicide.

“Rust is a fungal disease. If you start using fungicide to treat it, you’re going to kill off all the
beneficial fungi as well.”

As Moa Valley’s soil microbiology continues to improve, Vanessa and Rita will begin planting other vegetables as part of their crop rotation cycle. For their customers at the Feilding Farmers’ Market, and further afield, this means they will soon be able to enjoy even more produce from this great garlic growing team!