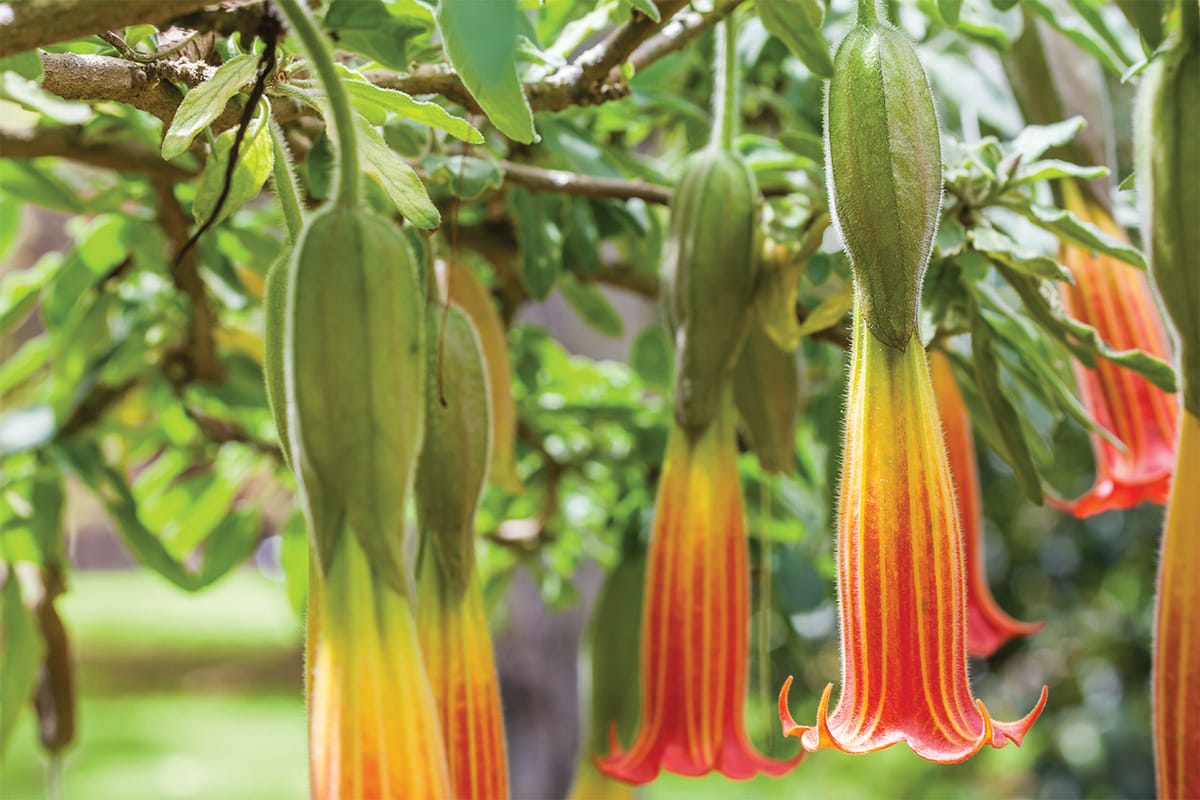 For a shot of red, try the slender-flowered Brugmansia sanguinea.

Brugmansia offers stunningly full blooms that would not look out of place in the ballroom.

Our chat about Brugmansia, the shrub formerly known as Datura, should probably begin with some clarification around the two names. Brugsmansias used to be in the same genus as daturas, but they were moved from there. To tell the difference between the two, look at the flowers – if they are facing up, it’s a Datura; if the flowers are hanging down, it’s a Brugmansia. There is a difference in the size of the shrubs also, with daturas being smaller. Right, with that cleared up, let’s continue.
What do brugmansias look like?

A sizeable shrub with large felted, light grey/green, slightly floppy leaves, it is grown for the gorgeous flowers it produces. They remind me of those over-the-top flouncy gowns that used to be worn at top-level ballroom dancing – the flowers are that good, and come in a range of colours from white to cream, yellow to orange, and pink to red. Also, they will be either a delicately single form or in a stunning double. The double white or cream varieties remind me of thick whipped cream, just lovely. It’s handy to know that the flowers of all the varieties will initially open greeny-yellow before their true colour kicks in, so don’t panic (as I may have) if you think you have received the wrong plant – all will be well. I also have one I grow mainly for the foliage – the leaves are a soft variegated cream and green, with the flowers being a nice bonus.

As brugmansias form large shrubs or small trees, some up to 5m with a width of 3m, it’s a good idea to allow enough room for them to naturally spread up and out – it allows for the pendulous flowers to hang unimpeded instead of being squeezed in a corset-like manner into a space that is too small.

Whether they are evergreen or not depends on your climate. They are usually evergreen, but if it is cold, they can lose some leaves – thus becoming semi-evergreen.

When do they flower?
The length of flowering depends on how kind the climate is. In a warm climate, blooms will be produced most of the year. If the climate is colder, flowering will occur from late spring until the first frosts come.
The flowers, which last for approximately four days, will not be fully open during the day – they are pollinated by moths and, to this end, open right up at night and pump out the scent. Brugmansia is a good plant to grow by an outside living space such as a deck, hot tub or barbecue area.

Where & how to grow
They do like some shelter as in nature they grow under taller trees. Sun is fine, but it is best avoided during the hot afternoon hours – aim for dappled shade at this time of day or plant in an open woodland-type situation. The flowers can get damaged in hot sun, which is not ideal.

Plant in normal, well-drained soil and, during summer, keep up with the watering and feeding – use rose or tomato food if you have it, applying this in early spring and then a couple of times during the growing season. These are fast-growing, hungry and thirsty shrubs. To get the best performance out of them and to keep them looking lush, keep up with this care regime, particularly if you have them growing in containers. Mulching is also desirable.

Brugmansias are not keen on frost – they are frost tender or half-hardy, so plant them with this in mind. They can bounce back after a touch of frost (you will need to cut them back in spring, when the frosts have finished), but not heavy frosts. Frost cloth is another option, as is growing them in containers that you can move around. I have several in containers, which is okay, but if you can plant them in the ground then they will grow and flower better. I think my pots are now too small (put this on the to-do list), which means I get fewer flowers.

If you get cold winters and there is concern about them surviving, you can move your potted brugmansias into the garage or shed to overwinter – just remember to reduce watering.

They can also be grown as houseplants, as long as you can provide them with enough light.

Any buggy issues?
Brugmansias are surprisingly attractive to snails, and I can attest to this. When the snails are ramping up in spring, they can, and do, munch on your plant, so be ready to sprinkle Quash pellets around the base to deal with them or they can decimate your plants, especially if your plants are young and succulent. I don’t understand what the allure is… the leaves are furry and the plant is poisonous – don’t the snails know this?

The sneaky red spider mite can set up home here also, particularly if the plant is in sun that is too hot, and it is too dry. Whitefly can also be a problem – these pests are so annoying – so set up sticky yellow cards to trap them. Plus, the odd caterpillar may take a fancy to your brugmansia.

How & when to prune
Prune after flowering, which can be tricky if they flower all year for you, but you will just have to do it – preferably after the first flush. Brugmansias flower on the new wood, so you don’t have to worry about affecting this year’s flowering, and by pruning the shrub you keep it tidy and compact. Don’t prune below the forks (the ‘Y’ that forms naturally as the plant grows) as the flowers only appear above the forks. In fact, flowering won’t commence until the plant has formed its forks.

When you want more plants
There are several ways to grow extras. The easiest is to put some cuttings in a jar or bucket of water, place them in a warm place and wait for roots to appear. Or you can plant your cuttings into a propagating mix. Take cuttings about 12cm long – leaves are optional as the cutting will still root without leaves. If there are leaves, remove all but a couple of small ones at the top. A tip is to take your cuttings above the fork in the stem – these will flower earlier than if you use the older wood. When roots appear in four to six weeks, pot them up and place them in a sheltered place. Alternately, you can take pieces of cut stem and lay these down on some potting mix where they will root, or, as is often done with rubber trees (Ficus), you could try the process of layering whereby you partially cut a stem and wrap it in sphagnum moss. Brugmansias can also be easily grown from seed, and you may get seed off your own plants.|

Are they poisonous?
They sure are. All parts of them. But so are many of the plants that we all happily grow in our gardens – plants that we don’t munch on. As they come from the Solanaceae family, I am betting that they taste bitter, not having actually tried them, so I’m guessing that would be an adequate deterrent.

I think these are amazing plants – for their look, their scent, their sheer chutzpah. Usually, I stick to the white or cream-flowered varieties, but now I am going to go and get myself some different-coloured ones – I can’t wait!