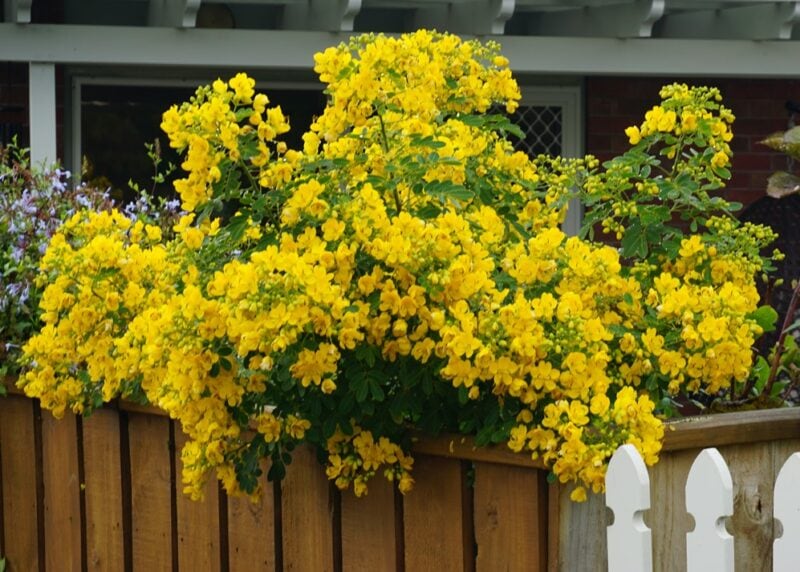 During late summer and early autumn, the gold-coloured flowers of Cassia stand out in suburban gardens. Words & Photos Michael Unverricht.

Cassias are worth their weight in gold for the colour they provide when other summer shrubs and trees are coming to the end of their seasonal flowering.

Also known as sennas (with many synonyms carrying the genus name Senna), Cassia is a genus of 500 species that goes back to biblical times. The Book of Exodus tells us that cassia oil was used for anointing (Exodus 30: 22–25). Many Cassia species are highly colourful plants within the legume family.

With only a few species available here, cassias are relatively unknown to present-day Kiwi gardeners. The most familiar species you’ll find to buy is known as Cassia ‘John Ball’. Towards the end of summer and into early autumn, gold flowers appear, attracting butterflies and bees as well as the eyes of passers-by. For the remainder of the year, their nondescript foliage attracts little attention. This species has been readily available for years; it is usually sold in mega stores and garden centres while in flower.

A larger, pinnate-shaped leaf variety is C. corymbosa (sometimes labelled Cassia corymbosa ‘John Ball’ or Senna corymbosa ‘John Ball’). This variety, which grows between one to three metres, has more of a tree structure and is sometimes referred to as the ‘sunshine tree’. Panicles of gold-coloured flowers sit atop every branch from March to May, with intermittent flowering throughout the other months of the year.

More recently, C. surattensis (syn. Senna surattensis) has become available. Sometimes called the ‘scrambled egg tree’, this species gets its name from its place of origin – Surat, which is located in western India. It is now used extensively in the United States as an avenue tree. It is a free-flowering, medium-sized tree that smothers itself in bunches of gold flowers in late summer. The flowers are followed by long flat seed pods that also look attractive as they hang from the branches.

The largest species that is available in New Zealand is C. fistula, which is also known as the ‘golden shower tree’. This is a deciduous tree that can grow to a height of six metres. The golden flowers, hanging in racemes up to 40cm in length, appear while the branches are bare and are then followed by the new season’s foliage.

Caring for your Cassia

All cassias are easy to grow; they are seldom bothered by pests and diseases. Once established, they can survive in poor soils and will even grow in sand. They prefer bright and sunny locations, can cope with drought, and are wind-tolerant.

Water needs are moderate once the tree is established. Nevertheless, a yearly dose of a general fertiliser will bring benefits of more luxuriant growth and a bigger display of flowers. A dry summer may see a premature leaf drop, but this is usually followed by increased flowering. Covering entire branches, the flowers can give an illusion of a floating cloud of gold. For the remaining months of the year, cassias may carry smaller bunches of flowers (this is mainly true with C. surattensis and C. corymbosa species).

Cassias are prone to irregular branches, and selective pruning of young trees may be necessary to develop a strong structure.

After flowering, give your cassia bush or tree a short-back-and-sides haircut. This pruning will encourage tighter and denser growth that in turn will give a tighter ball of colour for the following season. Left unpruned, cassias can become leggy and their long, slender branches can become prone to wind damage.

Cassias are slightly frost-tender. Severe frosts can damage the upper branches, but they recover with the return of warm weather.

Each variety that is available in New Zealand sets prolific amounts of seed. These are easy to grow and this is the main method of propagation.

Before planting, nick the shell of the seed with a sharp knife and soak the seeds in warm water overnight – this will hasten the sprouting of the seed. Plant in pots and cover with 3–4mm of soil. They can take up to four weeks to germinate.

This shrub’s brilliant display of seasonal colour makes it ideally suited for planting as a specimen tree in front yards or along streets and avenues, where its spectacular show will catch the eyes of visitors or passers-by.

Subscribe here to get Kiwi Gardener delivered directly to your door each month.