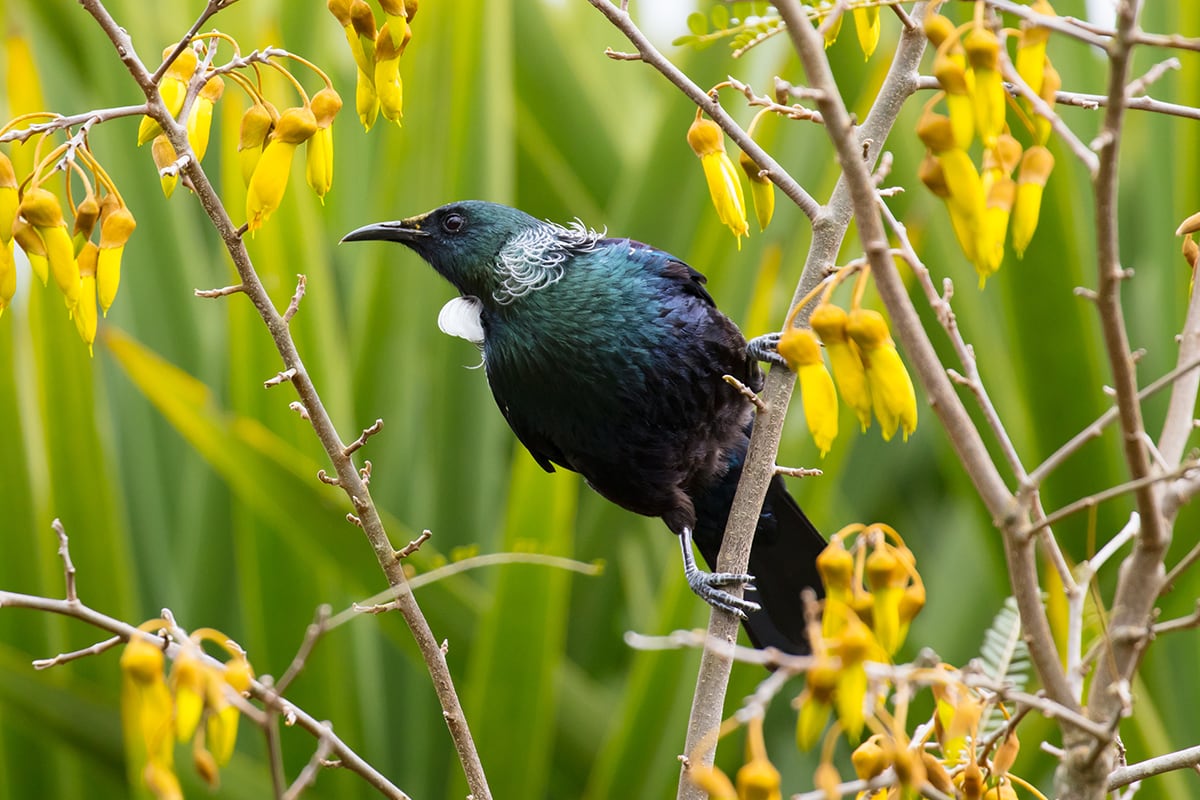 Kiwis love their birds, it’s a fact. Let’s look at some ways to encourage even more to your backyard, without breaking the budget.

We’re a nation of bird lovers, of that there is no doubt. We ‘flock’ to contribute to public bird surveys; we sail over treacherous seas to obscure islands with binoculars and long lenses. We rescue lost ducklings out of drains and call the council to gently remove nesting birds from traffic signals. We even boast that the whole community of Kiwis in Punakaiki turned off their street lighting to save fledgling seabirds flying off-course. And whenever we have a spare moment, we don a backpack and head out to monitor our local predator trap-lines. It’s no wonder, then, that so many of us feed birds in our backyards in the hopes that even more of them will come to visit us close up.

If all this makes us seem eccentric, it’s time to shrug our shoulders, because if a University of Exeter study is to be believed, birdwatching is not only enjoyable, it’s also very likely to be good for our health. The English university found a correlation between the number of trees and birds in an urban area, and its residents’ positive mental health. What’s more, wealth levels didn’t come into it. From the rich to the less affluent, everyone benefited, mentally, from the company of birds and trees.

With this in mind, how can those of us with very modest levels of discretionary spending feed the birds without emptying the piggy bank? Read on – because it’s easier than you think!

Target your species
Different bird species enjoy different foods. Rather than feed the entire avian neighbourhood, concentrate only on the species you want to attract, and choose those where feeding will be less costly. Native birds enjoy foods that are often already present (and free) in our gardens, especially those planted to attract them.

Kererū (native wood pigeon), for example, are hungry for tender foliage, flowers and berries. In the colder months, when berries are scarce, kererū greedily gobble down the leaves of kōwhai, broom, willow, elm and poplar.
In the coldest parts of the country, one of the first sources of food for kererū are the leaves of kōwhai and tagasaste (tree lucerne). Not only are these trees easy and quick to grow, but their seed comes free and germinates readily. Their flowers bring early colour (and more food for kererū) to the garden. When you notice kōwhai and tagasaste in flower in your neighbourhood, note down their position and return from early to midsummer to collect the seed.

Other sources of leaf and flower to grow for kererū include ornamental broom (steer clear of the weed variety) and cherry plum. The latter can be grown, free, from suckers collected in winter.
Tip: grow bushy tagasaste in pots that can be positioned in the garden close to a favourite birdwatching spot.

Rough but ready
Several backyard bird species, including sparrows and our range of colourful finches, feed on seeds. If you are usually tempted to cut down spent foliage as part of your pre-winter tidy-up, spare a thought for these seed-lovers, and let seed heads stay in place. If the taller heads have fallen over (where they will become damp and mouldy) prop them up to keep them bird-ready. When planning your summer planting with birds in mind, consider growing (for winter seeds) the likes of amaranth, echinacea, fennel, dill, orach, sedum and rudbeckia. Position them in the garden where they can be easily observed from a window.

Get the ratio right!
Several bird species, including tūī, korimako (bellbird) and kākā, enjoy sugar-water in the colder months. But although it can be tempting to mix up this artificial nectar randomly, and to strengthen the ratio when a cold snap is passing over, stick to the recommended recipe of one part sugar to eight parts water. Not only does this keep the cost of the sugar to a manageable level, but if you make the ratio stronger it will also attract bees and wasps that will devour the sugar-water quickly, while disturbing the birds.

Morning matters
If your bird-feeding budget is limited, make the most of it by feeding at a time that is likely to attract the greatest number of birds and visits. Birds are always looking for food in the earlier part of the morning. This is because they have used up much of their energy supplies overnight, keeping warm.

By following this feeding routine, you’ll not only be nourishing your birds when they most need it, but you’ll also be encouraging them to continue with their natural foraging pattern for at least part of the day.

The most economical way to feed these fruit-lovers is to leave apples and pears on the tree for as long as they last. But when your own supplies of these fruits are spent, head to the local greengrocers.

Greengrocers (as opposed to supermarkets) almost always sell boxes of ‘seconds’. For just two or three dollars, you can take home a whole box of goodies for the birds to eat. Sort through the fruit, refrigerating that which will keep, and freezing anything that will defrost and still be enjoyed by the birds.

Stock up
If feeding birds is a big part of your life (or if you want to share the cost with others in your neighbourhood), check out grain and cereal packaging plants that sell bulk supplies of floor sweepings for stock food.

Cooking kitchen scraps
Birds welcome soft vegetables to peck at, too. When you next peel your pumpkin and root vegetables, pop the peelings into a pot instead of the compost pile. Boil to soften, then place the tasty scraps in your bird feeder.

Skip the spider spray
Many species of birds that normally feed off nectar and fruit require a protein pack when it comes to feeding their young in spring. This is why you may have observed what seems to be unusual ground-feeding behaviour in the likes of tūī and korimako. Those who have abandoned the practice of insect spraying their house are quick to report numerous visits to window ledges and weatherboards as protein-hunting birds fly in to retrieve spiders and insects caught in their webs. If you want this close-up treat, never spray the exterior of your home. Note: centres treating injured birds frequently report that their avian patients exhibit secondary health problems due to having ingested toxins from sprayed insects.

Another simple way to provide insects for birds is to mulch your garden. This can be as simple as allowing fallen leaves to stay on the ground until late spring. Like garden mulch, the leaves become an overwintering spot for insects.

What not to serve
Although the following foods often come free in the form of scraps or because we have grown them in our gardens, don’t be tempted to feed them to the birds: