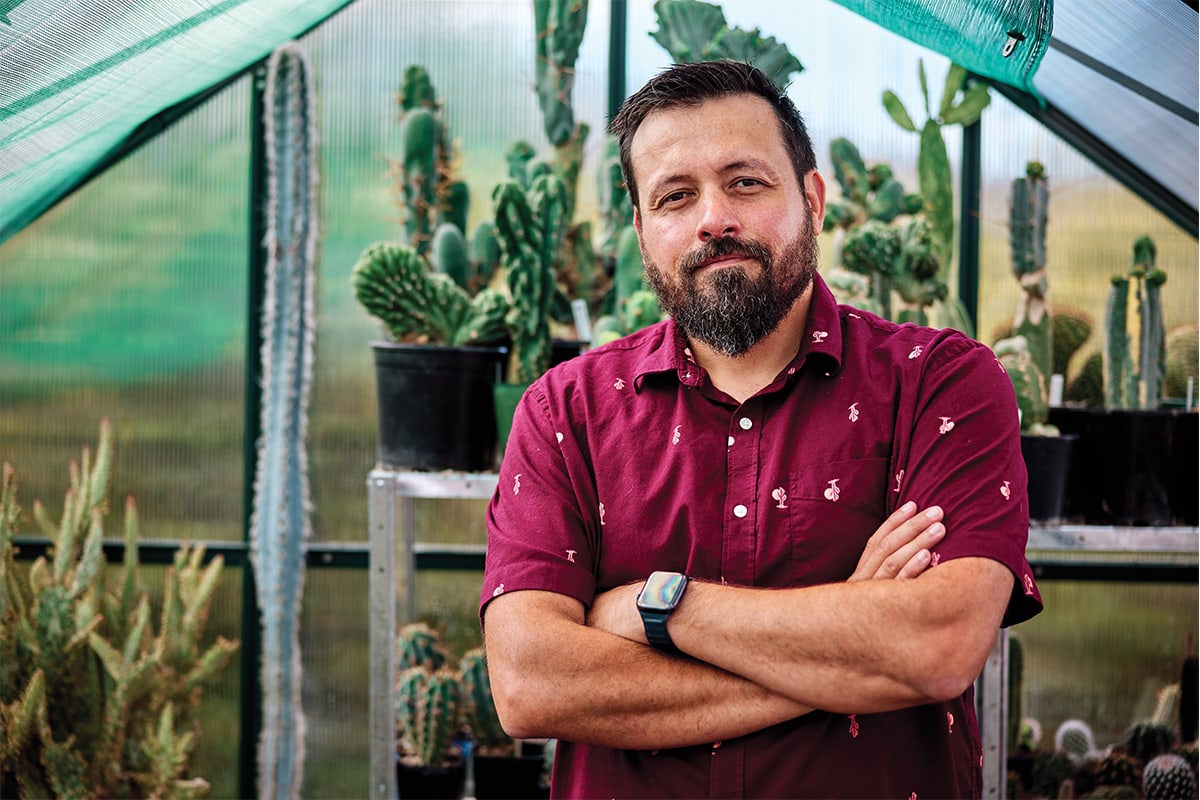 Faran Gillbanks likes to create mutations. The Wellington-based curator of cacti propagates some of the rarest cacti and succulents in the country.

When his daughter spotted a cute cactus at a Saturday market, it was the beginning of Faran Gillbanks’ fascination with some of the world’s prickliest plants. He once specialised in aquatic plants, but he was looking for a change and another interest-cum-business.

Now, Faran propagates some of the rarest cacti and succulents in New Zealand as Capitol Cactus – a Wellington-based nursery and gardening store he runs online.

“I enjoy preserving species and sharing rare genetics with other cacti collectors,” he says. “And it’s a way to ensure these plants aren’t lost due to unexpected events.”

Faran grows from locally sourced and imported seeds (the latter requires strict observance of all Ministry for Primary Industries regulations). He adds to his collection by acquiring plants and cuttings from local collectors and, whenever possible, shares his own cacti with other specialists.

However, there is a fine line, he says, between making more unusual cacti available in large numbers, and restricting their sale in order to keep up the excitement of growing something unusual.

‘Unusual’ for Faran extends to cacti with genetic mutations. Among these are cacti that exhibit variegation, monstrose (abnormal) growth, and fasciation (when fan-shaped crowns develop at the growing-tip of a plant, also known as ‘cresting’). His favourite cacti are those that exhibit more than one, or even all, of these mutations.

“If I had to pick a cacti I particularly enjoy, it would be the boobie cactus, which is a monstrose form of the blue myrtle cactus (Myrtillocactus geometrizans ‘Fukurokuryuzinboku’).”

To quickly multiply the plants Faran already has, he grafts them.
“Grafting cacti isn’t a difficult process, and because the grafts are making use of the existing roots of the host cacti, they grow 10 times faster than if they were planted from a cutting.”

Although cacti are generally associated with arid regions, Faran says we can aspire to grow at least some varieties of cacti outside in New Zealand – we simply have to provide the right conditions.

“Our cold, wet climate can be deadly for most succulents, particularly during winter when the soil remains wet – [it is] something that encourages attack by mould, fungus or bacteria. Cacti like their growing medium to dry out between waterings and most don’t like having their roots wet for more than a few days at a time. So, if you want to grow cacti outdoors, you’ll need to replicate the rainfall of their native climates.

“The best way to do this is to protect them from the elements, at least over winter. Growing them against a sheltered, north-facing wall can help, but you may need to erect a clear roof over them as well. If the plants are in pots outdoors during the warmer months, they can be moved into a greenhouse over winter.”

However, adds Faran, there are many columnar cacti in the Echinopsis and Cereus genera that can live happily outside, year round, without special attention, as long as they are given proper drainage and have any wounds attended to promptly.

Fortunately, for Faran’s business, his knowledge of cacti has recently coincided with a boom in houseplants. He puts this trend down, in part, to a move toward smaller properties where owners may not always have space for an outside garden. But, he says, Covid-19 lockdowns have also played a part in sparking an interest in cacti. “Having to spend more time indoors has seen people looking for new ideas to decorate their homes, and potted cacti are a very good way to do this.”

The other big plus with cacti, says Faran, is that they “thrive on neglect”.
“As long as you’re giving them water once a week in summer, and providing a dry spell for them in winter, they’ll do pretty well.”

As with most plants, however, cacti will perform best if they are tended a little more carefully. In a nursery situation, during the active growing season, Faran feeds a half-strength organic tomato fertiliser to his large cacti three out of every four weeks and his other cacti every second week. For the home gardener, however, he recommends a monthly feed using half of the prescribed maximum dosage of organic tomato fertiliser.

If you haven’t considered cacti-growing before, Faran has one important piece of advice: “Be patient.”

He adds: “Cacti are slow-growing plants, which have evolved to survive in the harshest conditions, so it will take years for most to mature and reproduce. If you want to speed up this process, you can always purchase larger plants, but they get exponentially more expensive with age.”

Watering
Generally speaking, cacti should be watered only in spring, summer and autumn, and just once a week (based on conditions). The important thing is to let the growing mix dry out completely before re-watering.

In summer, it is virtually impossible to overwater – as long as good drainage is provided. In winter, no more than a teaspoon of water a month should be given to cacti – aim to do this on a warm day.

The best way to water cacti is via ‘bottom watering’. To do this, place the potted cacti in a container of water, allowing the water to come well up the pot. Leave the pot in the water for up to half an hour to allow the moisture to be absorbed into the growing mix. If you have a large collection of cacti, or for the sake of time, need to water from above, take care to water only the growing mix, not the plants themselves.

Maintenance work
Repotting can be done into dry growing mix any time from spring to autumn. The repotted cacti should not be watered for at least a week to allow the roots to heal. Pruning and propagation should take place on hot days to allow wounds to heal quickly.

Pests & disease
Cacti pests include mealy bugs, spider mites, scale, slugs and snails. Faran adds suSCon Green (an insecticide) to his cacti growing mix to help combat pests. He also recommends sulphur powder to deal with infestations. Disease is rare in well cared for cacti, but if it does occur, sulphur can be sprinkled over any wounds.

For the kids
With their unusual shapes and bright flowers, cacti have always fascinated children. While Faran encourages kids to start collecting cacti, he is quick to point out that some, such as those in the Opuntia genus, have fine, dangerous spines and so are not suitable for young collectors. Parents and caregivers need to do their homework before a purchase is permitted.
Fortunately, says Faran, cacti need not be expensive.

“Many hardware shops and garden centres have a range of baby cacti available for around $5. Once your child has made their purchase, help establish a weekly watering routine with them, and explain that cacti like to ‘sleep’ during winter so they have the energy to grow in summer.”
any natives?

One such native is ureure (Sarcocornia quinqueflora). Look for this glasswort growing across rocks, on shell banks and in salty marshes.
More ‘showy’ is horokaka (Disphyma australe), a trailing coastal ice plant with a pretty pink-tinged flower.